Student debt is an enormous burden; not just for young Americans, but the American economy as whole. It has surpassed both auto loan and credit card debt to become the second highest source of consumer debt – being beaten out only by mortgage loans. While the average interest rate for a student loan isn’t as high as for these other types of debt, the sheer amount of student loan debt is a serious concern.  Increasingly, college students in America are borrowing vast sums against their future in order to finance a college education.

But where is all that debt coming from? Who holds it? Is it still increasing… and what is the future of student loans in the United States? It’s an unsustainable trend with the potential for drastic consequences.

To paint a clear picture of the current crisis, we have consolidated the following student loan debt statistics.

How much student debt is owed?

With 60% of all students having some form of debt by graduation–either through private loans issued by financial institutions or direct loans from the government–the sheer amount of debt is staggering.

What is the average U.S. student loan debt?

To put it in perspective, students graduating today that owe $37,000 could have instead financed: a new Audi A4 or Tesla Model 3, the down payment on your average home, or the bootstrapping of their own small business.

The federal government is the servicer for a vast majority of student loans. Most, however, are managed or guaranteed by a corporation.

Private student debt is a relatively minute fraction of the total debt.

Increasingly, graduate school is a larger percentage of that debt as more and more students are pushed into graduate programs due to the loss of value on bachelor’s degrees.

Surprisingly, it’s not just those in younger age groups that struggle with debt.

The problem of debt is especially acute for women.

How are student loans repaid?

Slowly… or in many cases, not at all. A sizable chunk of student loans are in limbo – or totally abandoned.

Fortunately, there are a multitude of methods to repay student debt that are conscious of the burden it imposes on graduates. Only a small fraction of all borrowers are on such a plan, however.

6.73 million federal loan borrowers are on an income-driven repayment plan.

Broken down by type of plan:

The advantage to these federal repayment plans is that, if the balance is not entirely paid by the end of the term, the remaining debt is forgiven.

The disadvantage is obvious: the standard federal student loan has a repayment term of 10 years. Doubling that exponentially increases the amount of interest owed and the lifetime cost of the debt.

There are two primary federal student loan forgiveness programs offered by the U.S. Department of Education.

FAFSA, the Free Application for Federal Student Aid, is an effort by the US government to help finance higher education for students that are determined to be eligible. It’s meant to be updated and submitted yearly. Federal loans and grants are calculated from the results of the FAFSA.

The impact of student debt

NerdWallet conducted a poll on students graduating with a 4-year degree in 2018. The results are unsurprisingly bleak, but there’s a ray of hope. With savvy saving and a thrifty mindset, the American dream is still achievable… if further than ever.

Average student loan debt by state: how have the numbers changed over five years?

For the past decade, we’ve been hearing about the United State’s massive student loan bubble, with some experts saying the $1.5 trillion in total student loan debt that Americans owe spells doom for the economy, while others declare the fear to be overblown.

With so much emphasis placed on the jaw-dropping nationwide numbers, statistics on how much recent graduates owe state-by-state (along with the percentage of students that graduate with debt on average in each state) are often overlooked. This is too bad, though, because the variance in graduate debt by state, and how those numbers have shifted through the years, is one of the more interesting facets of the student loan issue in America.

We looked at the Institute for College Access and Success annual student debt reports — the definitive compilation of student loan data — from 2017 (the latest available) and 2012 for a closer examination on how the average debt amassed by graduates in each state (save for Hawaii and North Dakota, for which data is incomplete) has fluctuated over the years.

Examining the data, we find an intriguing contradiction: while the average amount of college graduate debt has increased by a double-digit percentage in over half of the 50 states, over 80% of states witnessed no increase or a reduction in the proportion of recent graduates with debt.

How do we make sense of this? Well, tuition costs continue to rise, which explains why students would be compelled to take out larger loans, but the latter figure is something of a mystery. Fewer students are borrowing, yet the ones that do borrow are borrowing more.

Perhaps those that have no alternative must borrow funds to cover the full cost of tuition and other college expenses while others, chastened by the ongoing student loan crisis, are finding alternative means of paying, such as accepting money from their parents, working part-time while in school, or a combination of both.

Let’s take a look at the map: 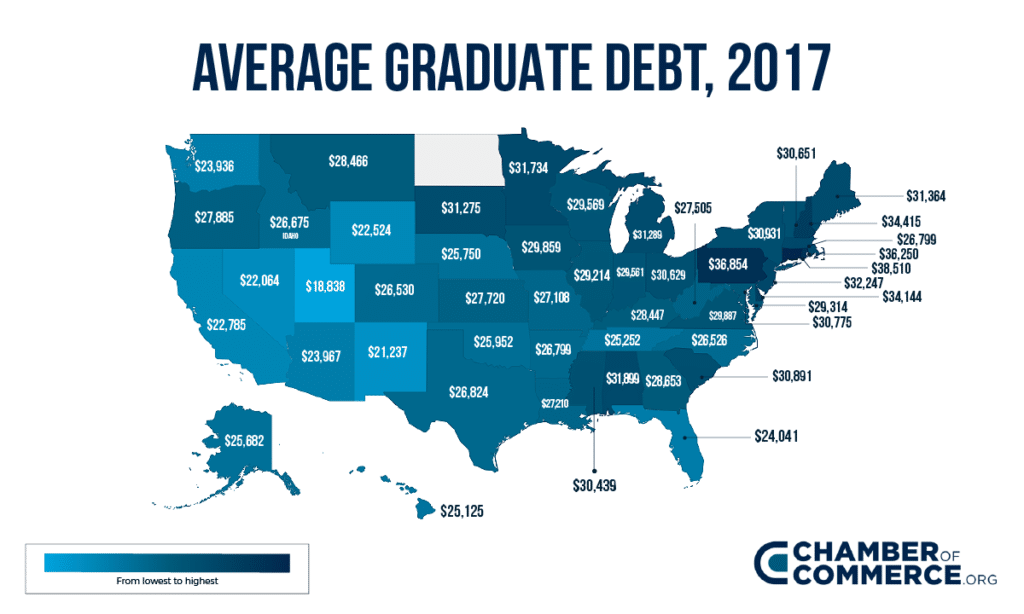 Looking at the recent figures 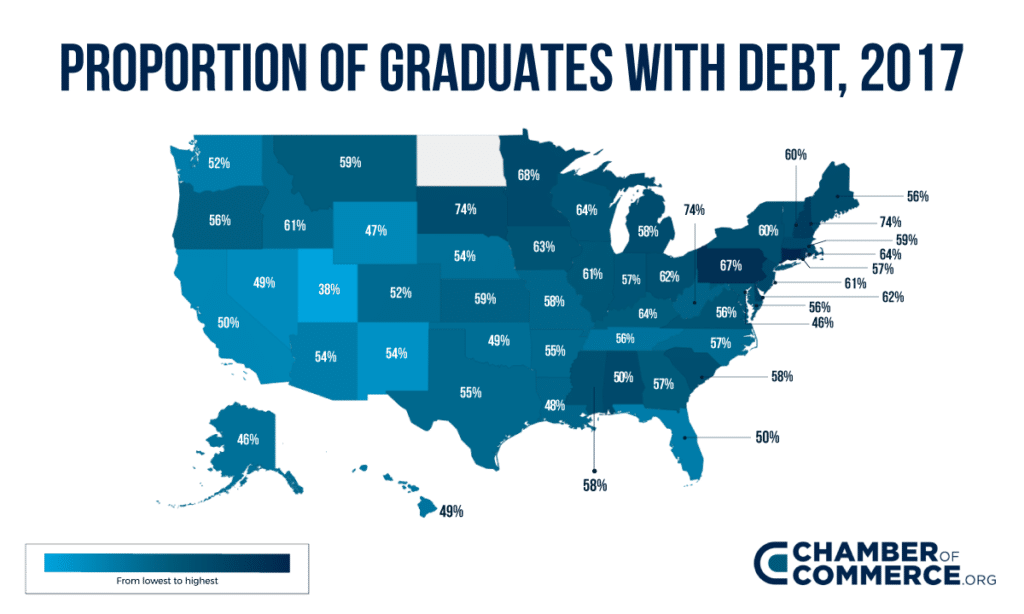 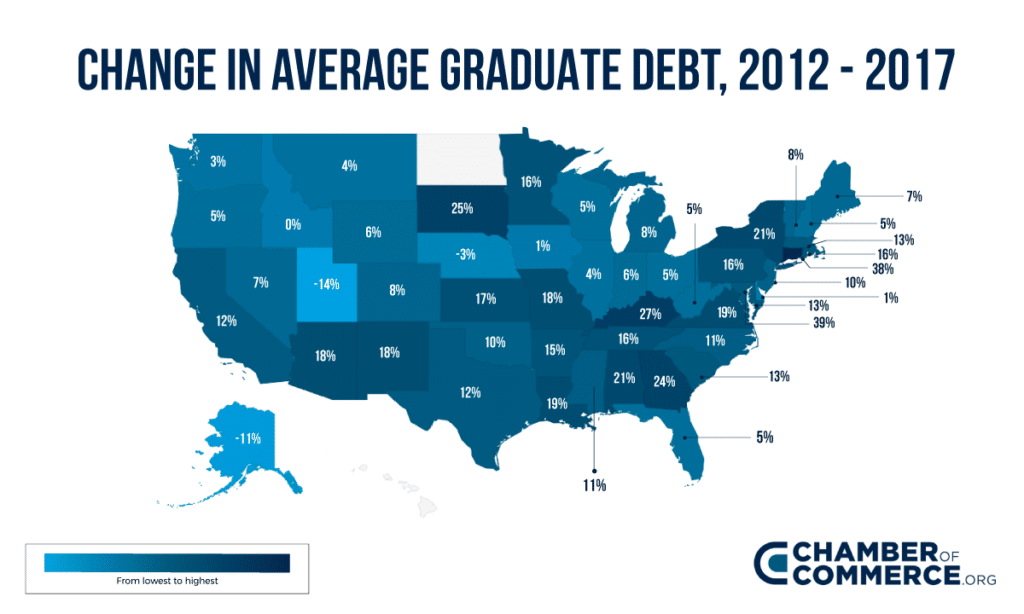 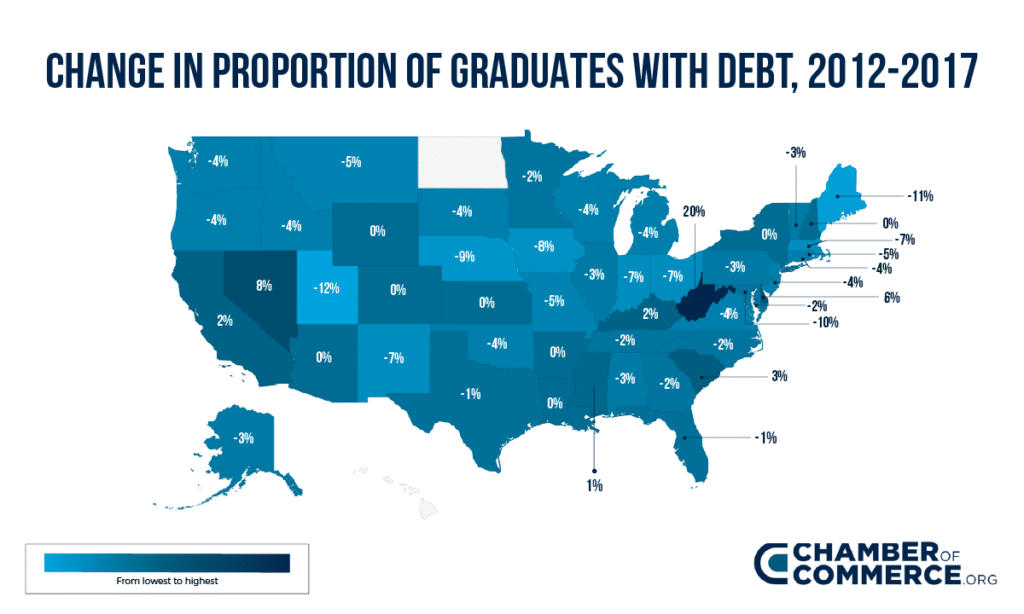