Whether it’s your neighbor, a relative, or a coworker, there’s a good chance you know someone who lives alone. In fact, more than 36 million Americans, or 29% of all U.S. households, are one-person households, according to the U.S. Census Bureau.

And the trend of living solo shows no signs of slowing down as major life milestones such as marriage are being put on hold. In 2022, the average age to marry was 30.1 for men and 28.2 for women. But which cities are home to the most people who live alone, and where has living alone seen the biggest increase?

In order to find America’s “loneliest” cities, we analyzed Census Bureau data across more than 170 cities with a population of at least 150,000. 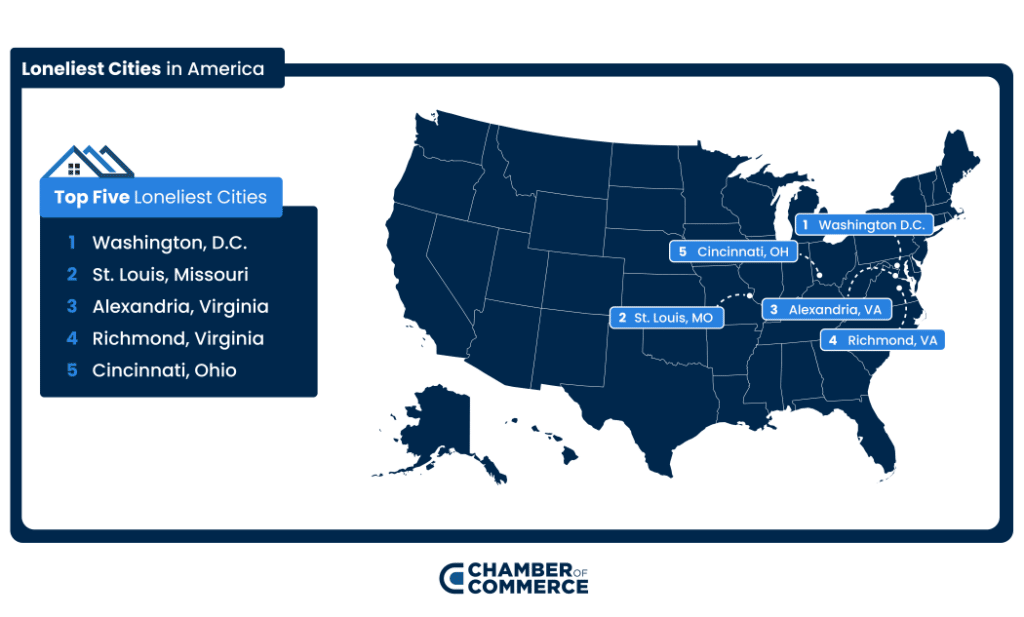 Which Cities are the Loneliest in America? 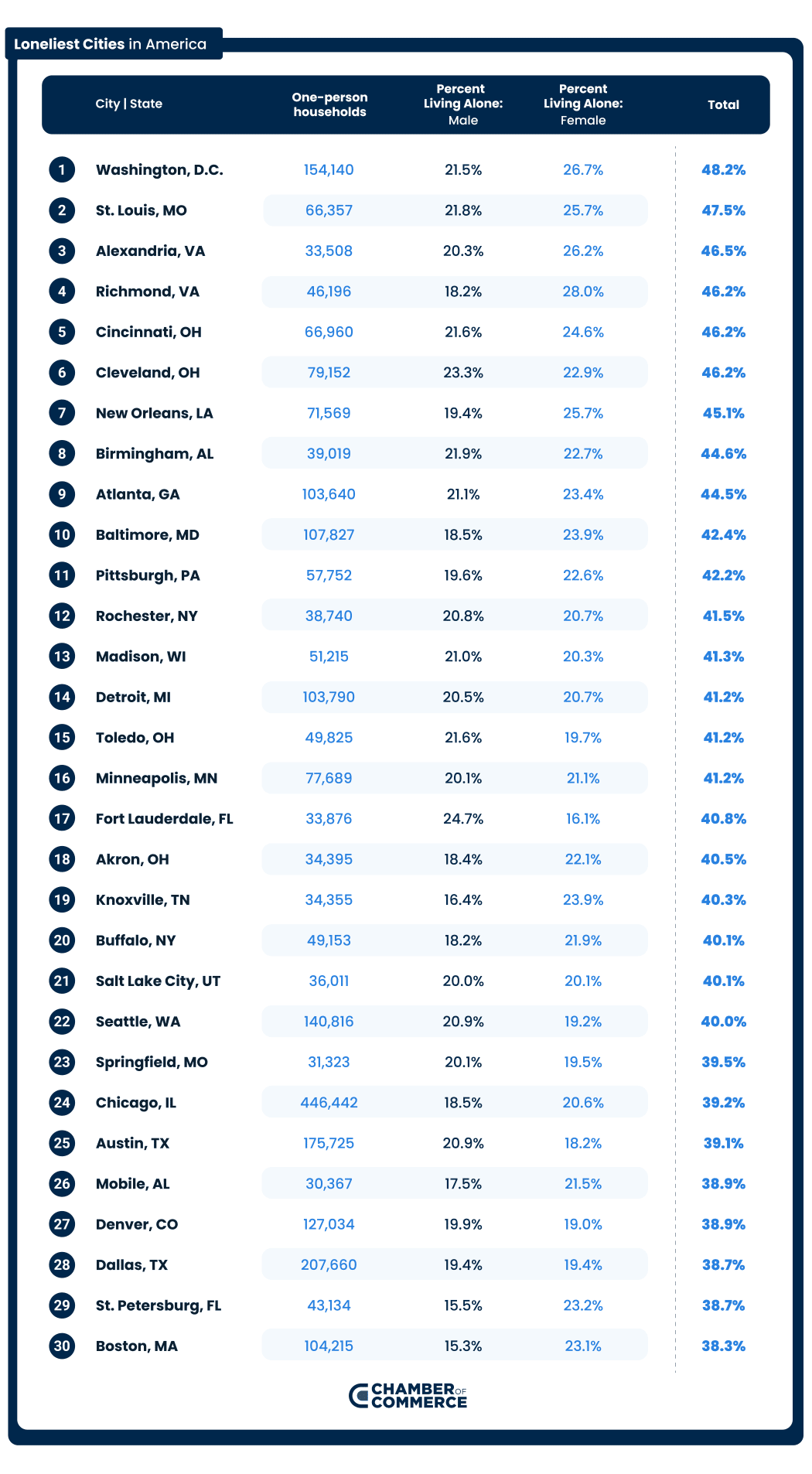 If you’re looking to find the loneliest place in America, look no further than the nation’s capital.

According to Census Bureau data, there are 319,565 households in Washington, D.C. Of those, nearly half (48.2%) are one-person households. Overall, 154,140 residents live alone in D.C., and 21.5% of males live alone while 26.7% of females in D.C. live alone. Washington ranks 7th in the nation for men living alone and 2nd for the number of women living alone.

The city also appears to be getting lonelier. On average, the number of people living alone has increased 5.9% year-over-year since 2016.

We travel from the nation’s capital to the heartland to find the 2nd “loneliest” city in America.

People living alone seem to be a trend within the D.C. metro area. Not only is Washington, D.C. No. 1 on the list, but nearby Alexandria, Virginia also ranks within the top five “loneliest” cities.

According to the Census Bureau, there are 33,508 one-person households within the city, which is 46.5% of all households. Alexandria ranks No. 3 for females living alone (26.2%), which is slightly less than Washington, D.C. (26.7%). Overall, the number of people living alone in Alexandria has increased 2.7% year-over-year since 2016.

We travel about 100 miles south from Alexandria to Richmond in order to find the 4th loneliest city in America. Overall, 46.2% of homes in Richmond are one-person households, and the number of people living alone has increased 3.9% year-over-year since 2016.

Rounding out the top 5 loneliest cities in America is Cincinnati, Ohio. Cincinnati is the 6th loneliest city for women and the 5th loneliest for men. Overall, 66,960 Cincinnatians live alone, which is 46.2% of households. The number of people living alone within the city has increased 2.9% year-over-year since 2016. 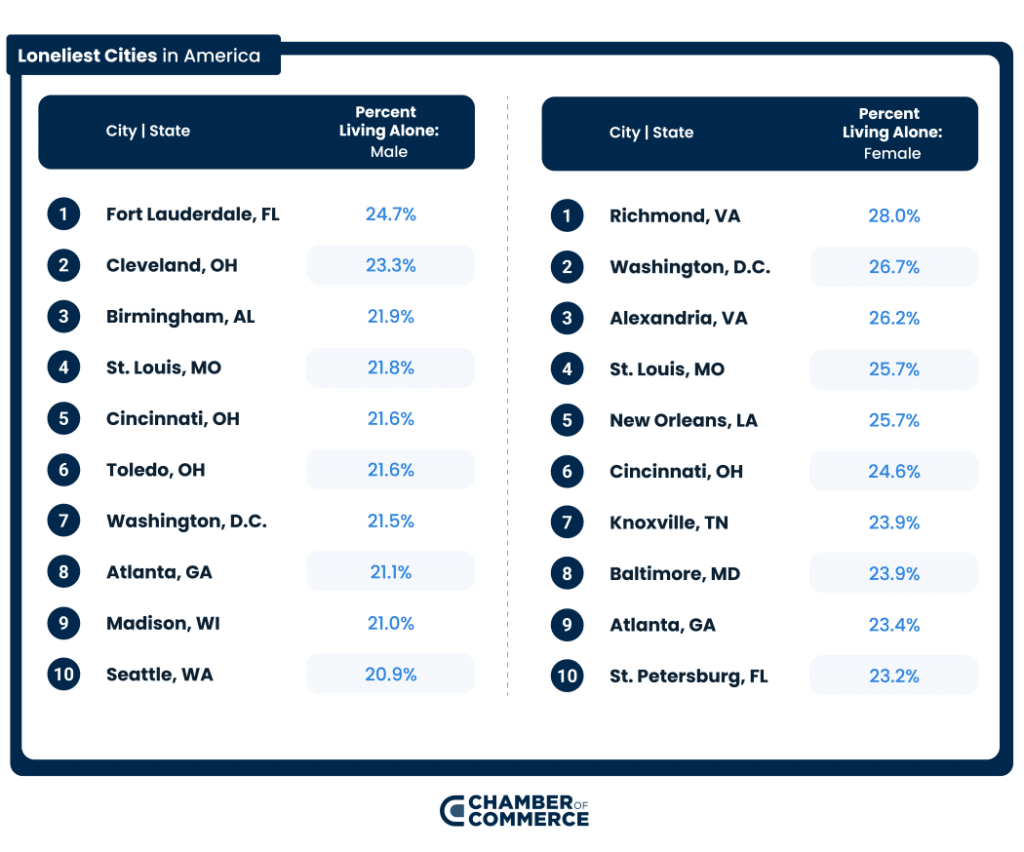 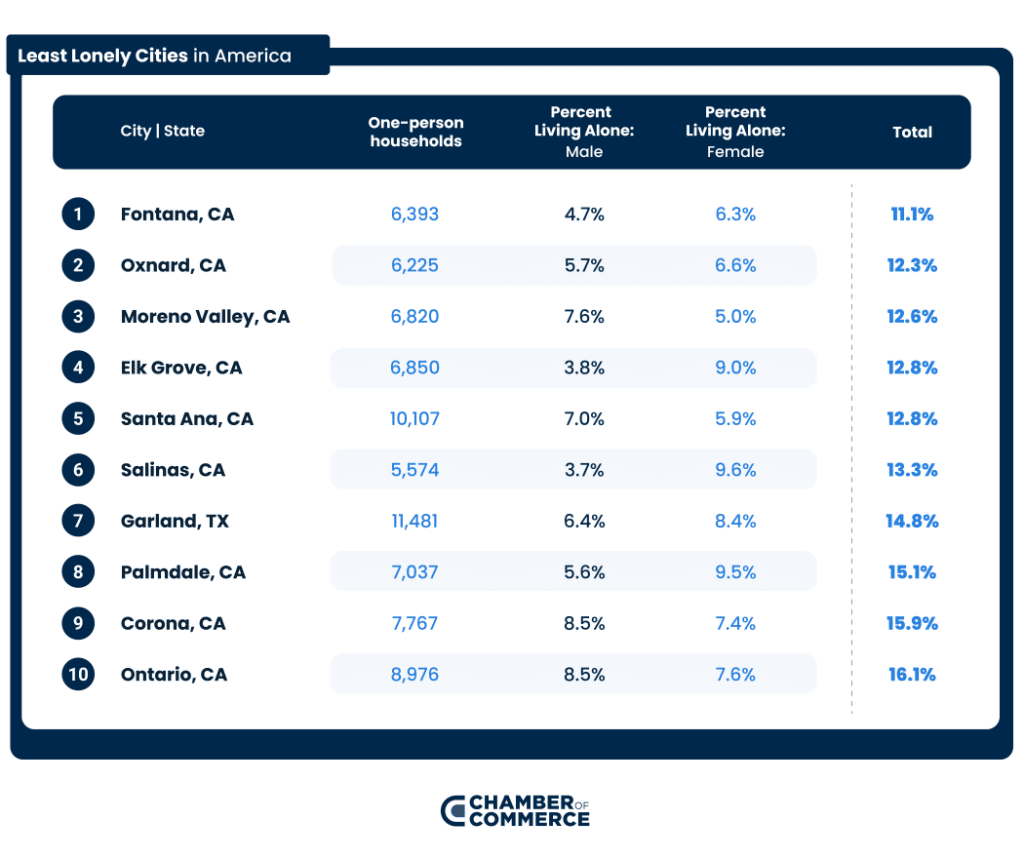 California cities dominate this list with 9 out of 10 being located in “The Golden State.” A majority of these cities, such as Santa Ana, Corona, and Ontario can be found outside of Los Angeles while the 6th least lonely city in America, Salinas, California, is located east of Monterey Bay. In the nation’s No. 1 “least lonely” city of Fontana, California, only 11.1% of households are one-person households.

While Moreno Valley ranks No. 3 on the “least lonely” list, males are getting much lonelier within the city. In fact, the number of men living alone within Moreno Valley has increased by nearly a quarter (23.2%) on average year-over-year since 2016.

The city saw its largest increase during the Covid-19 pandemic. From 2019 to 2021, the number of males living alone in Moreno Valley increased from 2,179 to 4,121. Data is not available for the Census Bureau’s 2020 American Community Survey due to the pandemic.

Which Cities Have Gotten Lonelier? 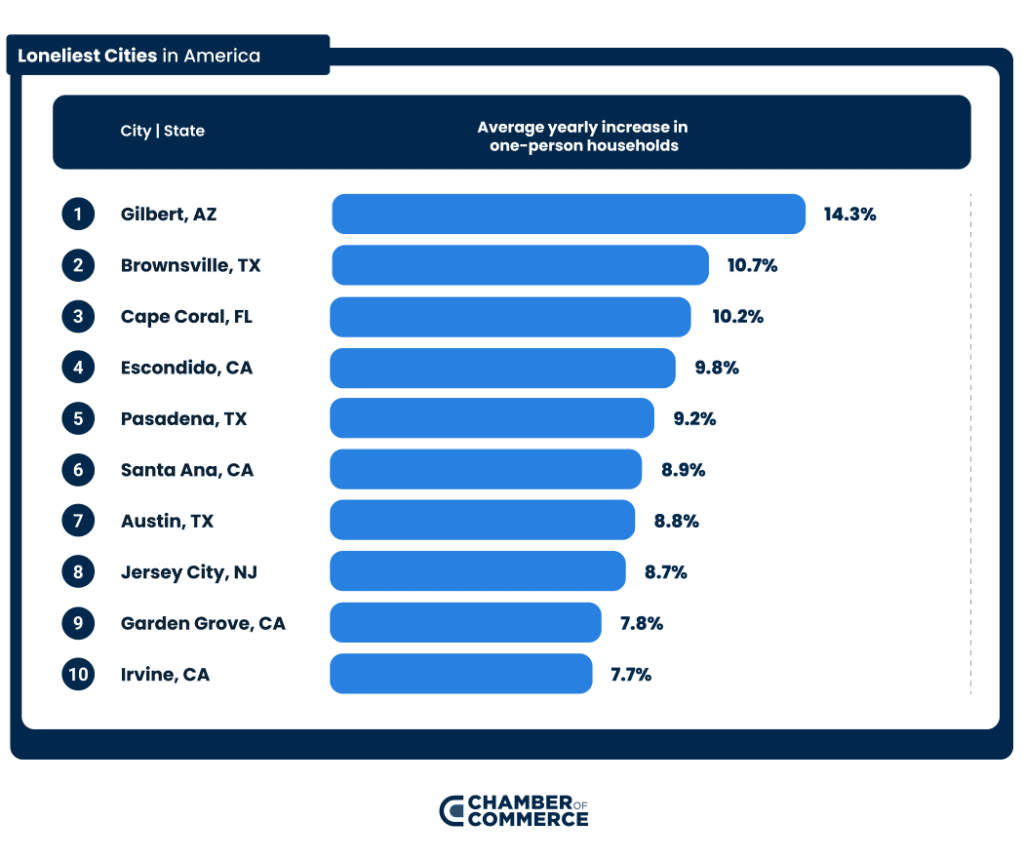 According to our analysis, the number of people living alone in the Phoenix suburb of Gilbert has increased 14.3% on average year-over-year since 2016.

Which Cities Have Gotten Lonelier for Males? 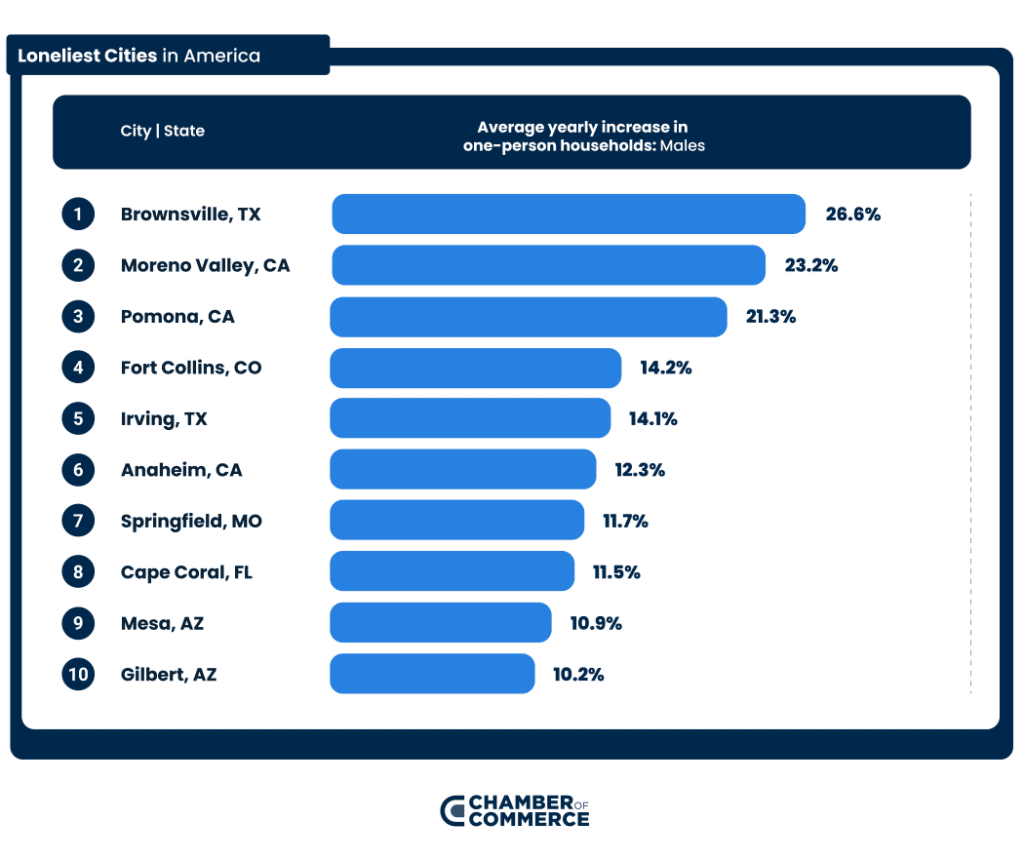 Which Cities Have Gotten Lonelier for Females?

Escondido, California comes in at No. 2 for the largest average yearly increase in the number of women who live alone, followed by Pasadena, Texas (No. 3), Grand Prairie, Texas (No. 4), and Yonkers, New York (No. 5).

Increase in Living Alone during Pandemic 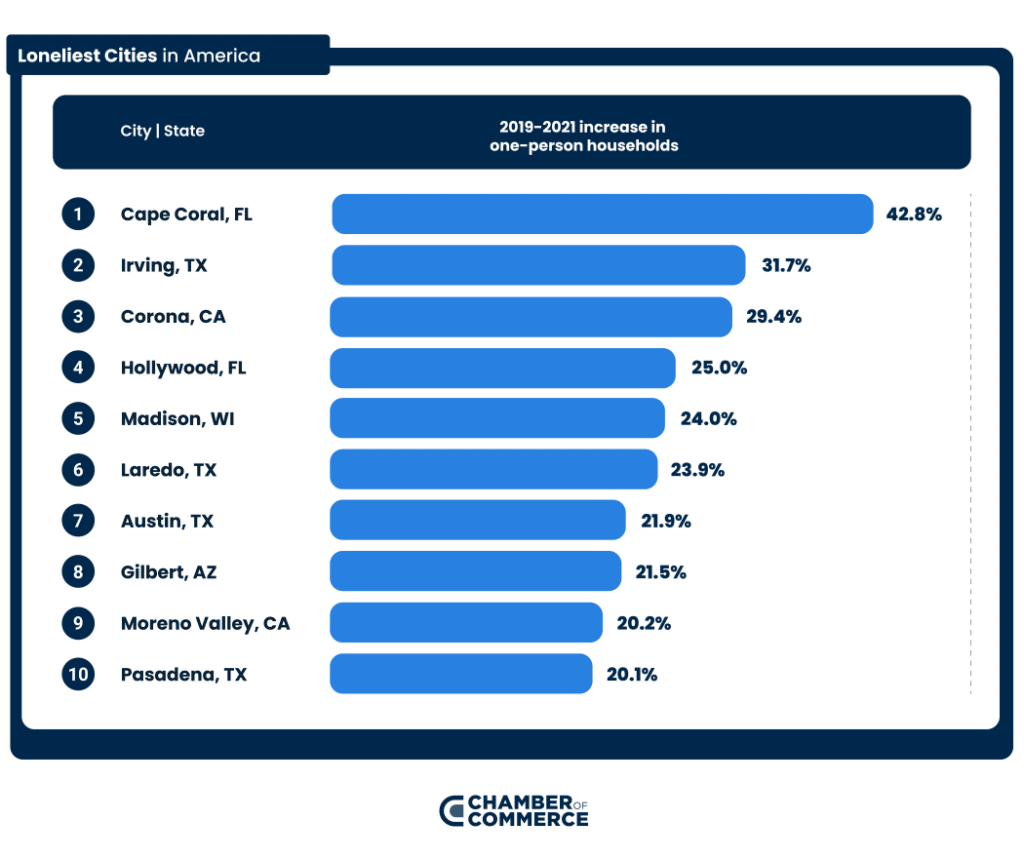 Whether it was career changes or relocating, the pandemic uprooted many people’s lives, but certain cities in particular saw drastic changes in living situations. For example, the number of people living alone in Cape Coral, Florida jumped from 14,559 in 2019 to 20,787 in 2021, which is a 42.8% increase. Elsewhere, Irving, Texas experienced a 31.7% percent increase during that same time period. Irving is followed by Corona, California (29.4%); Hollywood, Florida (25%); and Madison, Wisconsin (24%).

Whether you’re buying a home for the first time or looking to rent an affordable studio apartment, it’s important to keep in mind where you want to live ⁠— and who you want to live with. If living alone is appealing to you, it’s always a good idea to weigh all of the pros and cons before making the leap.

To determine our ranking, we analyzed more than 170 census-defined places with a population of 150,000 or more via the U.S. Census Bureau American Community Survey. Our analysis looked at the number of one-person households in each city as well as the number of males and females living in one-person households. To determine the average yearly increase, we analyzed 2016-2021 one-person household data. Data from the American Community Survey was not available for 2020 due to the Covid-19 pandemic. Data for Augusta, Georgia; Lexington, Kentucky; Nashville, Tennessee and Louisville, Kentucky was not available from 2016-2019, so these cities were omitted from the average yearly increase portion of the analysis.

Fair Use: Feel free to use this data and research with proper attribution linking to this study.