LGBTQ Rights in the U.S. Workplace

Despite all the progress made in advancing equal rights for LGBTQ people in the past decade, the community still experiences adversity and hardship in many areas of life, with employment being one of the most problematic areas.

According to a 2017 study by the Robert Wood Johnson Foundation,  20% of LGBTQ Americans have experienced discrimination due to their sexual orientation or gender identity when applying for a job, while 22% say they have not received equal pay or have been passed up for promotions more frequently compared to straight employees. LGBTQ people of color have it even worse: 32% of them have experienced discrimination during the job application process. These statistics indicate just how rampant discrimination is in the American workplace.

Although the struggle is ongoing, progress in enacting anti-discrimination policy for LGBTQ people has been made, even if the situation is not the same for every American. In this article, we’ll look at the status of LGBTQ rights in the American workplace, answer some common questions on the topic, and provide resources to help you join in the campaign for equality. Until everyone–regardless of race, sexual orientation, gender identity, or sex–has equal employment opportunity, the work is never finished.

The struggle for federal LGBTQ anti-discrimination legislation – An overview

The battle to enact federal anti-discrimination protections for LGBTQ individuals in the workplace has raged for the past 50 years. While many states and counties have laws in place that prohibit employment discrimination on the basis of sexual orientation and identity, there is no federal statute that directly addresses LGBTQ discrimination in the workplace, despite many attempts to pass such legislation.

For years, in order to make up for the lack of official federal statues on LGBTQ employment discrimination, the Equal Employment Opportunity Commission (EEOC) has interpreted Title VII of the Civil Rights Act of 1964 as covering discrimination against LGBTQ employees since the law prohibits discrimination on “the basis of sex”.

The following is a timeline of recent rulings where the EEOC has followed this interpretation:

While all of these recent rulings should be considered wins in the fight for LGBTQ employment discrimination laws, they are not necessarily binding and could be overturned in further court cases. This is due to the fact that they are based on interpretations of the Civil Rights Act of 1964, rather than federal legislation directly addressing LGBTQ employment discrimination.

Presidential administrations, including those of Bill Clinton and Barack Obama, have attempted to enact anti-discrimination policy through executive orders, however, these acts are not as solid as passing actual laws: the Trump administration notoriously overturned an Obama policy using Title VII to protect transgender workers from workplace discrimination.

It remains the case that the most steadfast legal protections afforded to LGBTQ individuals are provided through laws put in place by individual states and localities, rather than at the federal level.

LGBTQ workplace discrimination protections: How does your state fare?

That leaves 12 states lacking any type of LGBTQ employment discrimination protections, whatsoever, however individual counties and cities in these states have passed their own anti-discrimination laws.

In order to inform you about the LGBTQ employment discrimination laws in effect in your state, we’ve graded all 50 states based on their level of anti-discrimination protections and sorted them into five groups.

“Group 1” states offer the most wide-reaching protections, while “Group 5” states having no statewide protections for LGBTQ individuals in the workplace. Between these two extremes, it’s a sliding scale: groups 2 through 4 have some protections in place but are lacking in certain areas.

How each state came to prohibit certain forms of discrimination varies: many passed specific non-discrimination laws, while others like Wisconsin, Indiana, and Florida acquired protections through other means such as federal court rulings, decisions of local civil rights commissions, and executive orders.

Check out our guide to the Disability and Workplace Rights 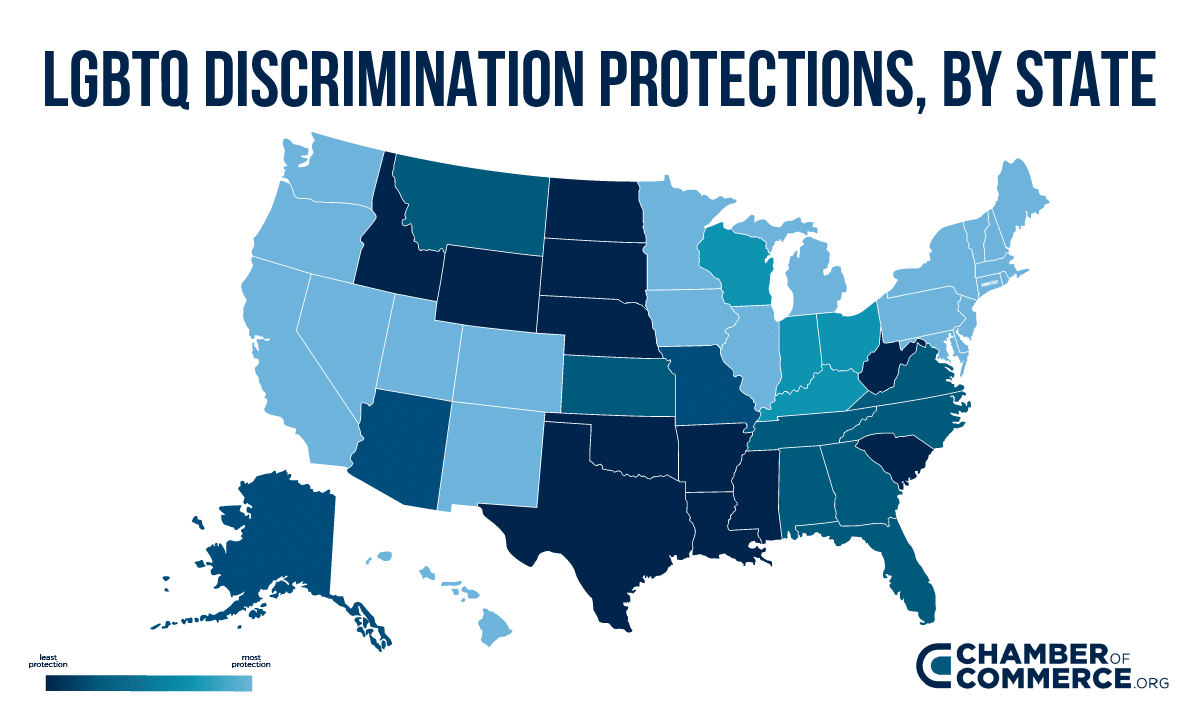 Group 1 states: Sexual orientation and gender identity discrimination prohibited in both the public and private sectors

Which countries have laws in place prohibiting employment discrimination based on sexual orientation or gender identity?

In many ways, the United States is behind the curve in terms of civil rights and laws protecting its citizens from discrimination. As of 2019, 74 countries have passed federal laws banning employment discrimination on the basis of sexual orientation, including our neighbors Canada and Mexico, as well as many European nations like the UK, France, and Germany (source).

Europe is the most progressive continent in terms of discrimination protections, with 44 nations on the continent having federal laws against the practice. Asia and Africa lag behind: less than 20% of the nations in each continent protect against LGBTQ discrimination in the workplace.

What can I do if I am the victim of discrimination at my job?

If you are the victim of discrimination due to your sexual orientation or gender identity at your workplace, or as a job applicant, don’t worry: there are ways to fight back.

Your first move should be to file a complaint with the U.S. Equal Employment Opportunity Commission (EEOC). The agency takes the stance that LGBTQ employment discrimination violates the Civil Rights Act of 1964 and has frequently campaigned successfully for discrimination victims across the country, often winning damages on their behalf.

You can also contact your local American Civil Liberties Union (ACLU) branch for consultation and possible legal representation against employers or other organizations that have discriminated against you.

According to the ACLU, students at American public schools have the right to express who they are and wear clothing consistent with their gender identity. Schools also have a responsibility to engender a safe learning environment for students, free of harassment or threatening behavior. Additionally, a school is obligated to keep a transgender student’s status confidential, and a failure to do so could constitute a violation of federal law.

Unfortunately, depending on where you live around the country, schools enforce these policies to varying degrees. If you or someone you know is the victim of harassment or discrimination due to sexual orientation or gender identity at school, contact the ACLU and explain the situation.

Is it common for companies to have their own anti-discrimination policies?

If you are currently hunting for a job, you may consider visiting the website of the company you are interested in or contacting a representative to see if it includes sexual orientation and/or gender identity in its non-discrimination policies.

How can I help in the campaign for LGBTQ rights?

Interested in helping fight for LGBTQ equality in the workplace and other areas of life? There’s plenty that you can do, regardless of your sexual orientation or gender identity.

To begin, visit the website of the Human Rights Campaign, the largest LGBTQ civil rights organization in the nation, with over 3 million members and supporters around the country. There, you can donate to the organization, sign up for their email newsletter, and search upcoming LGBTQ events in your area.

Hopefully, this article has educated you on the anti-discrimination laws in your area and convinced you of the importance of continuing the campaign for LGBTQ equality and acceptance. As our nation is based on the principles of liberty and equality, the difficulty that LGBTQ people continue to face in the workplace and when applying for jobs every day is a glaring injustice.

Regardless of whether you are an LGBTQ person, a family member, or an ally, we urge you to advocate for the rights of everyone and don’t hesitate to act if you are witness to discriminatory practices at your job or any area of life. It takes courage and selflessness to enact lasting change.