How rich is each US state?

Despite the fact that they are all part of the same country, US states vary considerably in terms of wealth. For example, California’s GDP of $2.94 billion (gross domestic product) was over 25 times higher than Mississippi’s in the same year. Though Mississippi’s population is 13 times smaller than California’s, the fact remains: states are not created equal when it comes to gross assets.

In order to elucidate the wealth disparity between states, we’ve ranked the richness of all 50 using 6 variables, including real per capita personal income, per capita consumption expenditures, poverty rates, state and local general revenue, per capita spending, and the amount a resident of the state needs to be considered part of its top 5 percent.

The results are telling, with regional clusters appearing at the top, middle, and bottom of the ranking. However, there are a few surprises, and you might be interested to find out where your state falls on the list. 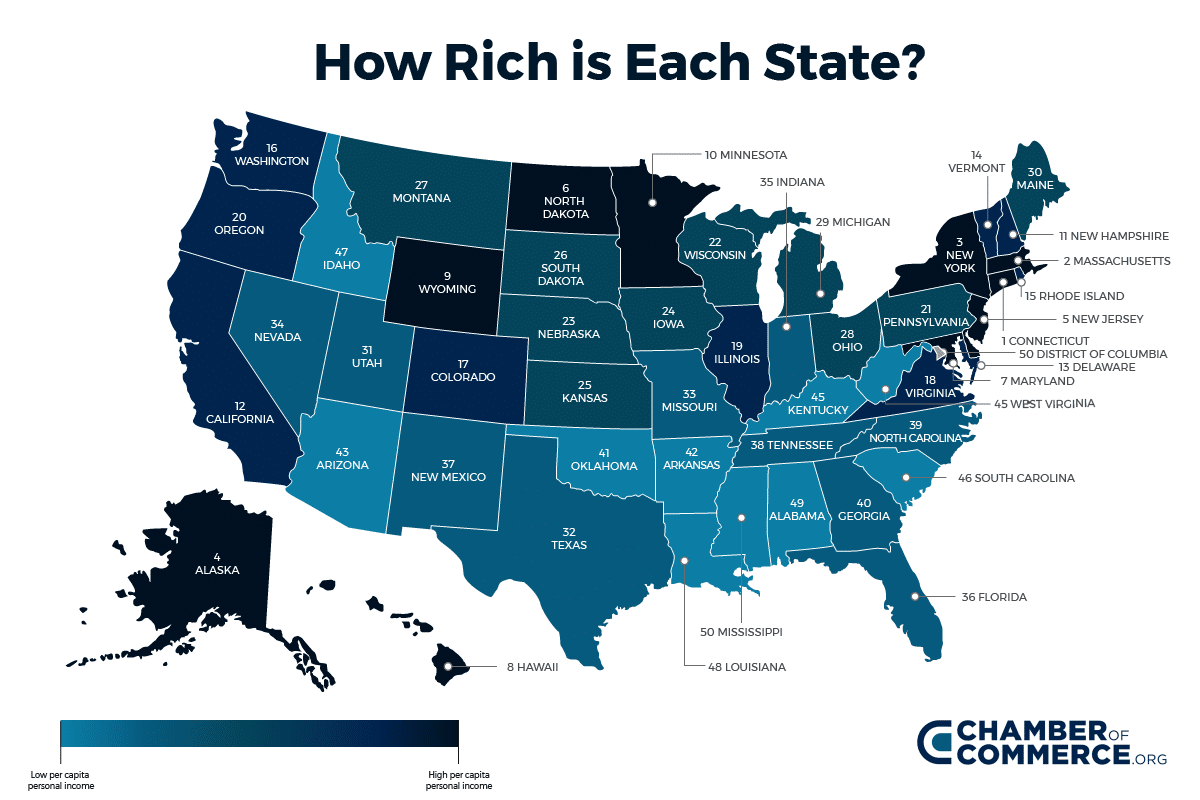 Where are the poorest US states located?

The least wealthy states in the country are mostly clustered within a single geographic region: the South. 8 of the top 10 poorest states are located in the South, as well as 12 of the top 15. Most are in the Southeast, too, with Oklahoma (#41) and Arkansas (#42) being the furthest west.

These states are characterized by paltry numbers across the board in all variables, including low real per capita incomes, low per capita state spending numbers (with the exception of West Virginia), and poverty rates significantly above the US average.

While the bottom 30% of the list of US states by wealth are almost exclusively Southern states, two Southwestern states, New Mexico (#37) and Arizona (#43) are included, along with Idaho (#47) of the Pacific Northwest.

Check out the Best Cities to Retire in the US

Where are the richest US states located?

As with the poorest states, one US region stands out among the others due to its affluence: the Northeast. Half of the top 10 richest states belong to this region, along with 9 of the top 15. Furthermore, not a single Northeastern state appeared in the bottom twenty, with Maine falling the lowest, at #30.

Does a state’s poverty rate correlate with its total wealth?

The short answer is yes, the poverty rate of most states–which is defined as the ratio of the population whose per capita income falls below the US poverty threshold of $12,140 (or $25,100 for a household of 4)is aligned with its overall wealth ranking. Of the 10 states with the highest poverty rates, 8 are among the top 10 poorest states, while the remaining 2 are among the top 15 poorest.

The correlation is less strong for the 10 states with the lowest poverty rates, but nevertheless present: 4 of them are among the 10 richest states, while an additional 2 belong to the top 15 richest states.

However, there are some interesting exceptions. Utah, whose 3-year average poverty rate of 7.9% is the 3rd lowest in the country, is only the 31st richest state. The Beehive State’s real per capita income and state spending numbers are both averages, indicating that while Utah doesn’t have a high concentration of wealthy, high-spending people, it doesn’t have a large population of people in the lowest income brackets, either.

Additionally, 2 of the richest states, New York and Alaska, have higher poverty rates than one would expect, indicating an above-average wealth inequality gap between the states’ richest and poorest citizens.

Alaska, the 4th richest state overall with a high real per capita income and the by far the highest per capita spending of any state, has the 19th highest poverty rate, which, at 12.2%, is above the national average. New York, the 3rd richest state, is also marked by a poverty rate that’s high in relation to other variables: its rate of 11.8% is around the national average.

The 10 richest states in the US

As previously stated, 50% of the 10 richest states in the US belong to the Northeast, while the remaining 5 are scattered across the country. Let’s take a closer at each of them.

Placing 10th, Minnesota is the 2nd richest Midwestern state, 9 spots higher than Illinois (#19), the 3rd richest state in the region. The Land of 10,000 Lakes is elevated by its large metropolitan area, the Twin Cities area of Minneapolis-St. Paul, which is the top 20 richest metro in the country, yet is also characterized by affordability and job opportunity.

Minnesota’s wealth is impressive, but not extravagant. The state’s residents are mostly middle or upper-middle class, and its poverty rate of 8.7% is the 2nd lowest of any top 10 state.

An outlier as the only state in the Mountain region to crack the top ten, sparsely-populated Wyoming boasts a high real per capita income, high per capita state spending, and the highest state revenue per capita of 15,370.

Wyoming is also somewhat notorious for its wealth inequality: the Jackson metro area, characterized by large vacation homes and ski resorts, is the most unequal place in America as the top 1 percent earn 132 times more than the rest of the population.

As a remote island archipelago in the Pacific ocean, Hawaii is literally separate from the pack. The state’s wealth-related statistics are unique: Hawaii’s real per capita income of 42,507 is by far the lowest of any state in the top 10, however, poverty is also low, and per capita, state spending and state revenue are both high.

Hawaii gets a boost from its lucrative tourism industry: the state welcomed a record 9.95 million visitors in 2018. Altogether, visitors to the state spent a collective $17.82 billion, which is a 6.8% increase over the previous year.

Due to its size and mid-Atlantic location, Maryland has a mixed identity with characteristics of both southern and northern states. Though Baltimore, the state’s largest city, is often in the headlines due to its issues with crime and poverty, Maryland is nevertheless one of the richest states in the country.

In fact, Maryland has the most millionaires of any state in the US, boasting 178,003 millionaire households. Much of the state’s wealth is concentrated in the affluent suburbs around Washington, D.C.

Placing 6th, North Dakota earns the distinction of being the richest state in the Midwest. In addition to its high real per capita income and state spending, the state generates the 2nd-highest state revenue per capita of any state, with 14,636.

Once one of the poorer US states, North Dakota has experienced an oil boom in the past two decades, earning fortunes for many of the state’s residents, and increasing job opportunities in the state. In 2019, North Dakota had the highest intergenerational mobility of any state.

Although New Jersey isn’t commonly thought of as a wealthy state, it is in fact one of the richest in the nation and owes its status to a few very affluent areas. The Garden State is home to some of the wealthiest counties in America, including Monmouth and Bergen, where median household incomes top $150K.

On a whole, New Jersey fares very well, boasting a high real per capita income and state revenue similar to its neighbors New York and Connecticut.

Alaska is a land of contrasts: the 49th state has some of the highest violent and property crime rates in the US, yet also boasts one of the highest concentrations of millionaires in the country.

Being wealthy in Alaska helps a lot since it is one of the most expensive states in the country in terms of commonly-bought goods due to its remoteness and the expense of shipping goods into the state. Tellingly, Alaska has the highest per capita state spending in the country with $13,171, as state residents must spend more to get the essentials, compared to other states.

It should come as no surprise that New York is one of the 3 richest states in the country, considering the large amount of concentrated wealth in New York City. In fact, the Big Apple is home to more millionaires than any other city in the world, as home to almost 1 million millionaires.

The vast wealth of New York’s richest residents is more than enough to offset those belonging to lower-income brackets, though its poverty rate is higher than any other state in the top 10, with the exception of Alaska.

Massachusetts is exceptionally wealthy, earning the 2nd highest real per capita income and highest per capita personal consumption expenditures of any state. For a city its size, Boston is very wealthy, despite an increasing wealth gap, and the surrounding suburbs are among the richest in the nation.

While many of its residents are moderately wealthy, the Bay State is also home to some of the richest people in America, including billionaires Abigail Johnson, the CEO of mutual fund corporation Fidelity Investments, and Robert Kraft, CEO of Kraft Group and the owner of the New England Patriots NFL team.

While Connecticut is middle-class for the most part, the uber-rich residents of Fairfield County, which is home to a number of the most affluent communities in the United States, elevate the state to the top spot.

The results of this ranking indicate that relative wealth in the United States can largely be determined by the region in which a state is located, with a majority of the wealthiest states belonging to the Northeast, the poorest found in the South, and the states of the Midwest and other states located somewhere in the middle.

While there are some exceptions, and each state has rich and poor, one can confidently predict a state’s wealth by where it falls on the map, and the situation is likely to remain this way for the foreseeable future.

This ranking was compiled from the latest available data on the following: Real per capita personal income (i.e., chained dollars), which is real personal income divided by the midyear population, Poverty: Percentage of People in Poverty by State Using 2- and 3-Year Averages, State and Local General Revenue (per capita), Spending by State (per capita) and How much you need to be in the top 5 percent in every state (minimum amount).