Alaska and Virginia hold the highest debt and will pay $11,000+ in interest by paying the minimum balance.

Americans now hold $1 trillion in credit card debt. This hefty balance is the highest credit card debt the country has held since the great depression, according to the Federal Reserve.

While that’s a staggering amount of debt, it’s not tangible to many Americans. It’s just another number. However, when you start looking at credit card debt by state, it tells a more relatable story.

By compiling data from a variety of sources including the U.S. Census Bureau, the Federal Reserve, and CNBC, we were able to look at how much credit card debt consumers in each state have and examine how much interest racks up when only the minimum balance is paid.

What’s the average credit card debt in each state?

Why do consumers in some states have high credit card debt while others have less? Credit card debt is the result of many factors. The cost of living, availability of affordable housing, a state’s economy, employment rate, and access to financial education can all play a role.

At a glance, here’s a look at the top three states with the highest and lowest credit card debt: 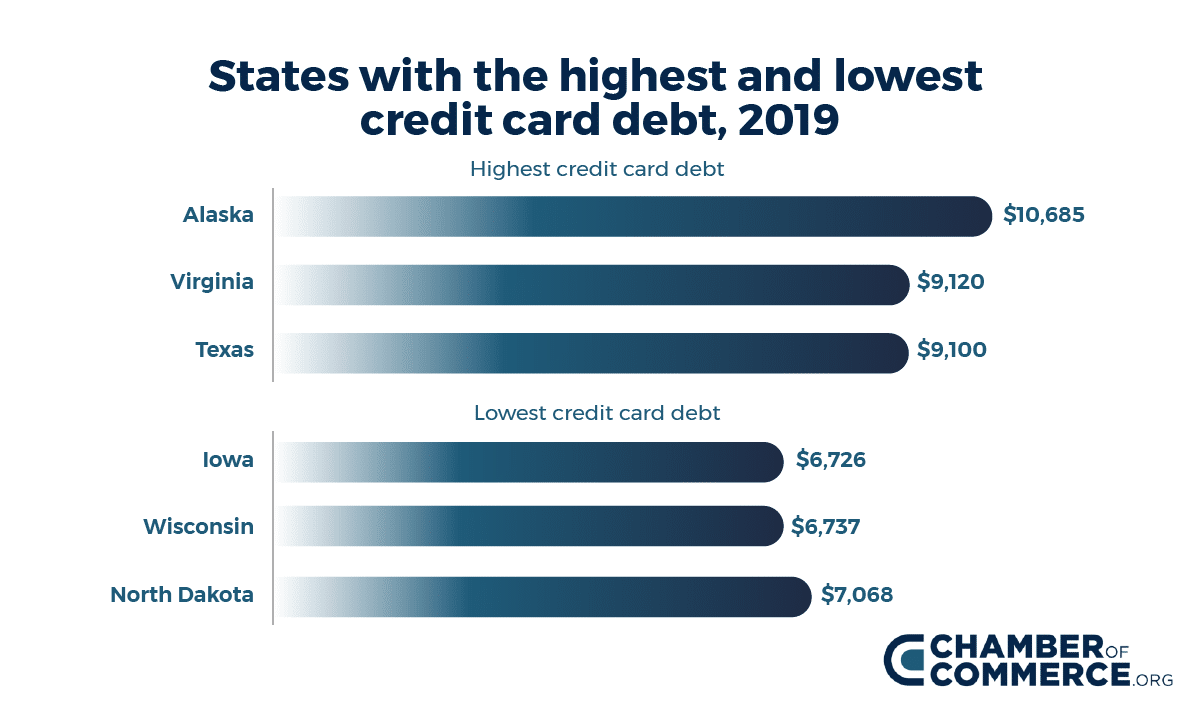 How does the rest of the nation shape up? Here’s a look at credit card debt by state: 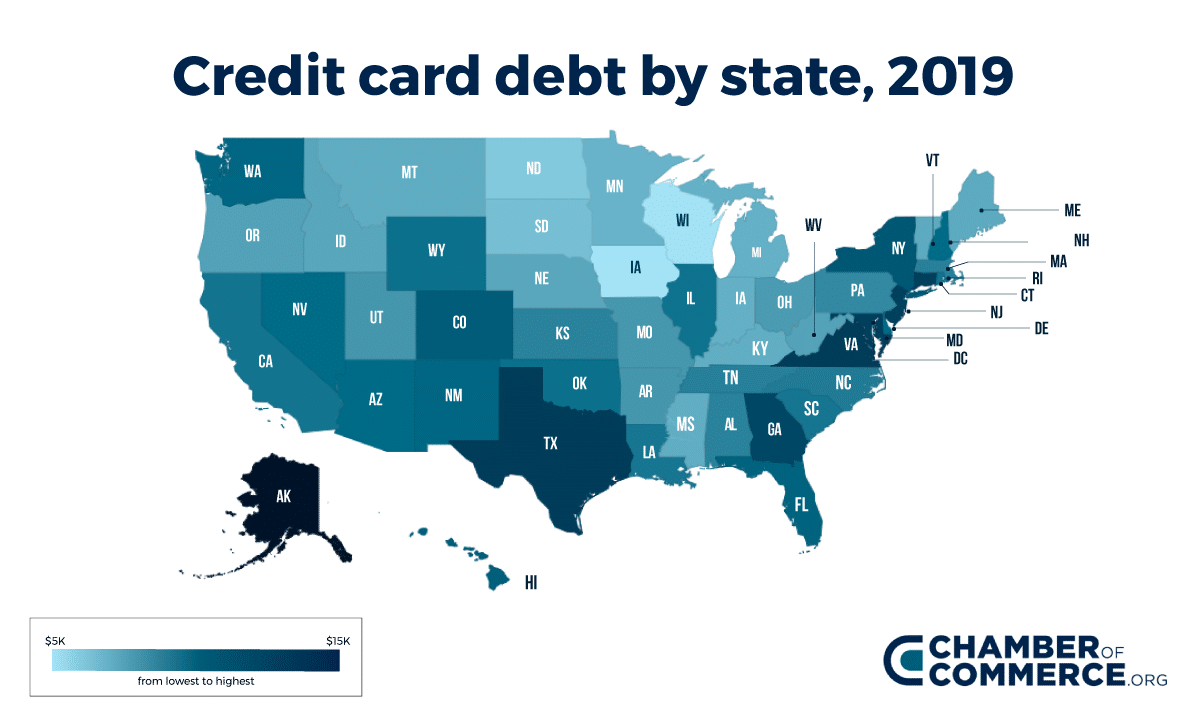 Why do Midwesterners have the least credit card debt?

If you break the U.S into regions, there’s one trend worth noting. Consumers living in the midwest tend to have the least amount of credit card debt. Consumers in Iowa, Wisconsin, North Dakota, Minnesota, Michigan, and Indiana have debt ranging from $7,382 in Michigan to $6,726 Iowa. 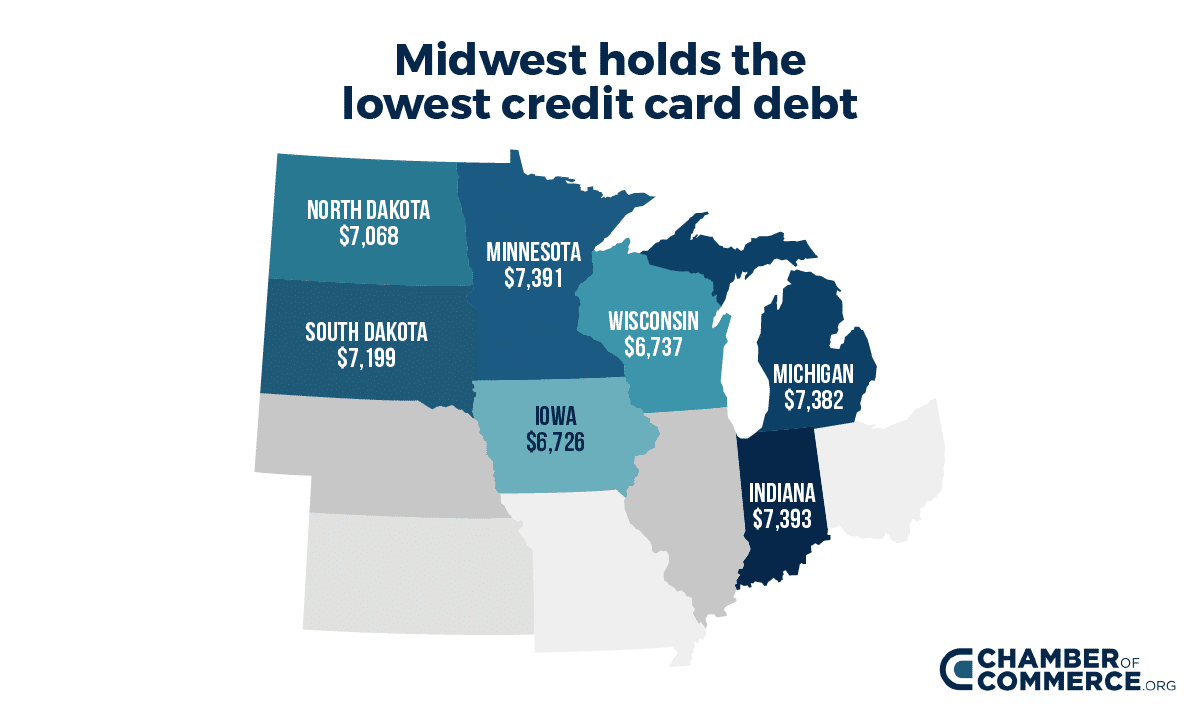 What’s going on in the Midwest? Why does this region have some of the lowest credit card debt? For starters, midwestern states have strong economies and low cost of living. Consumers in the region are also a bit more frugal than others, and are even embarrassed to admit they have credit card debt, says MarketWatch. In short, there are a lot of factors at play, both on the state and personal level.

Is there a correlation between credit card debt and household income?

You might assume that people who make less money rely on credit cards more, especially since research shows 68% of consumers use credit cards to buy everyday items. It stands to reason that households with less cash on hand might turn to credit cards to purchase things like groceries and gas.

It’s a similar story in Alaska. Alaska has one of the highest median household income rates at $73,181 and consumers in this state have the highest credit card debt, sitting at $10,685.

How much interest is paid when only applying the minimum amount?

Credit card companies set the minimum balance owed. Typically, the minimum amount owed is 2% of the balance. If a consumer only pays 2% every month, interest will rack up – quickly. Therefore, the best course of action for short-term and long-term financial stability is to learn how to pay off debt.

Check out our roundup of the Best Credit Card Processing Companies

Nevertheless, we crunched the numbers to see just how much interest consumers in each state pay overtime when only the minimum amount is paid each month. We assumed an average interest rate of 20.31%, which is the average rate for a consumer with a good credit score.

As you might expect, the states with the highest credit card balances also pay the highest in interest.

Alaskans, who shoulder an average $10,685 in credit card debt, will pay a whopping $13,249 in interest – if they only pay the minimum amount each month. At that rate, it will take nine years and four months to pay the entire balance.

So, let’s say an Alaskan consumer buys a boat for roughly $10 thousand and puts it on a credit card. If only the minimum balance is paid each month, the consumer will pay $13 thousand in interest. The interest accumulated over the course of time is greater than the initial purchase of the boat.

In contrast, if the boat owner decided to pay the credit card more aggressively, paying 15% of their household monthly, the debt would be cleared in 14 months. However, that drastically changes the monthly amount paid. The payment would go from the minimum $214 a month to $914 a month.

Of course, Alaskans aren’t the only ones paying hefty amounts of interest. In the Lower 48, consumers in Virginia, Texas, Maryland and Connecticut will pay interest north of $11,000 if they only contribute the minimum payment. Here’s a look at states paying the highest amount of interest. 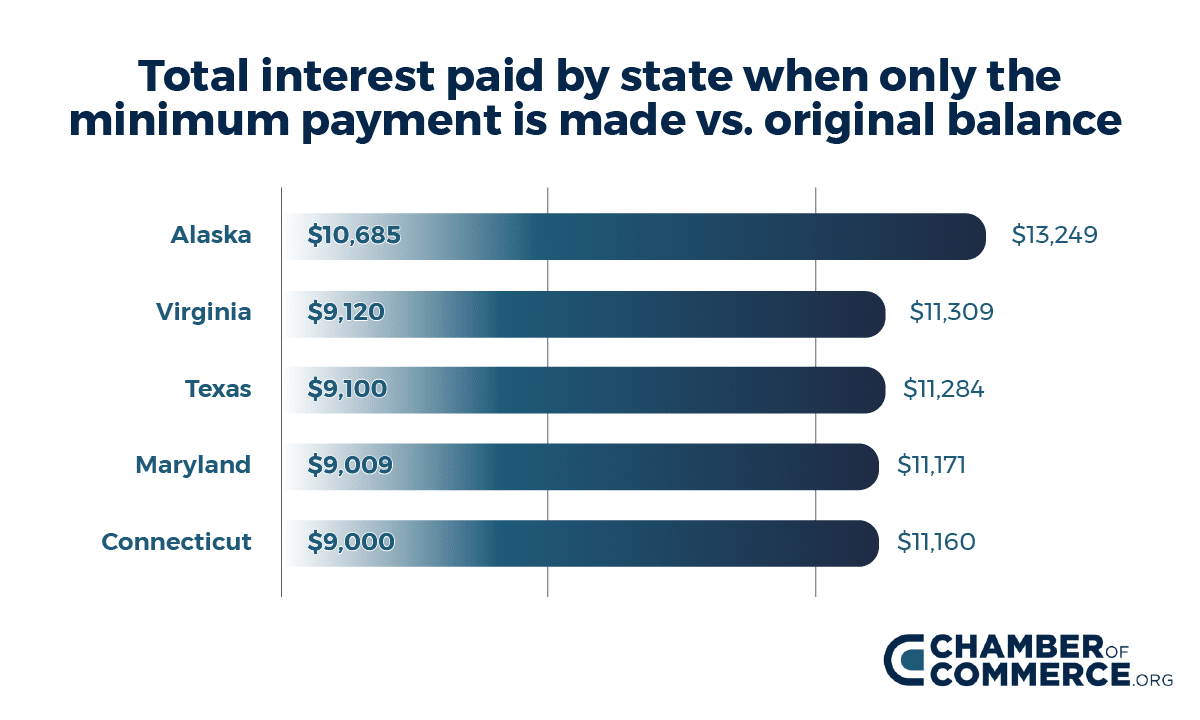 Cash is quickly becoming obsolete and credit cards are taking their place. While the popularity of credit cards has grown, it has strapped Americans with an increasing debt load.

Here’s what our research revealed:

We gathered data on “Total credit card balance” from the Federal Reserve, “Median annual household income” from the U.S. Census Bureau, and “Months it would take to pay off debt putting 15% of income towards it” from CNBC. Calculations were based on monthly payments of 2% of debt and an interest rate of 20.31% per year.