Best Cities to Live in Mississippi

Moving to Mississippi? Check out our guide to Starting a Business in Mississippi.

As the birthplace of the blues and a main battleground of the 1960’s civil rights movement, Mississippi has a ton of history and cultural cache. Nowadays, the Magnolia State is battling to improve its education system, healthcare, and economic standing. If the state at large takes cues from our picks for Mississippi’s best cities to live in, things should improve in a short span.

Mississippi’s best city to live in is Madison, a small city of around 26,000 named after the fourth president of the United States, James Madison. With an estimated median household income of over $100,000 (over twice the state average), Madison’s residents are affluent and well educated.

Ranking #2 is Hattiesburg, the county seat of Forrest County. Hattiesburg’s economy benefits from the presence of several large companies such as Kohler Engines, Regions Financial Corporation, and Coca-Cola Bottling Company United. Multiple theaters, museums, and art galleries ensure that there is always plenty to do in the city.

East of the state capital lies #3 Brandon, a small city of around 24K with a median household income higher than the state average. The city is on the rise, with the local government investing in new infrastructure and new fire stations to increase the safety of its inhabitants.

Our #4 Mississippi city, Clinton, is also located in the Jackson metropolitan area, making it a great, peaceful place to settle if one must commute to the capital for work. Clinton is home to Mississippi College, the oldest in the state and the second oldest Baptist college in America.

#5 Ocean Springs is a delightful little coastal city with a unique downtown area featuring a diverse array of shops and restaurants uncommon for a Mississippi community. Ocean Springs’ offbeat character and art galleries make it a gem unlike any other in the state.

Best Cities to Live in Mississippi 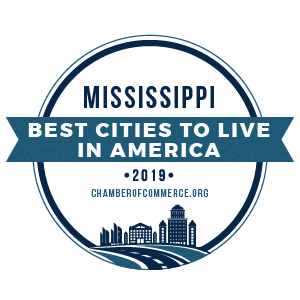