Moving to Michigan? Check out our guide to Starting a Business in Michigan.

While recent news about Michigan cities like Detroit and Flint has been pretty depressing, there is still a lot to love about the Great Lakes State. It’s hard not to be drawn to its beaches and woods, terrific universities, and a high concentration of excellent breweries. Also, the wild Upper Peninsula, with its old growth forests and old mining town ruins, is like another world, altogether. Check out our list of Michigan’s best cities to live in for advice on where to settle in the state. Spoiler alert: all of the top five are located in Oakland County.

Troy, a large Detroit suburb of over 83,000, is Michigan’s best city to live in. Troy’s population is affluent and well-educated, with a large part of the workforce employed in the city’s large automotive sector. Troy is also a college town, home to campuses of over half a dozen universities.

The regally named Royal Oak ranks #2 on the list. A bit smaller than Troy, Royal Oak is also more affordable, boasting cheaper real estate prices and a lower cost of living, yet is nevertheless safe with a lower than average crime rate. Of note is the Detroit Zoo, which is located in the city.

Bloomfield Hills is a small city with an extremely wealthy populace boasting a median household income of over $170,000. Undoubtedly, it’s a great place to settle if you work in the area and can afford it. The city is the home of the Cranbrook Educational Community National Historic Landmark.

Coming in at #4 is Rochester, a small, picturesque little midwestern city near many nature preserves with trails that can be used for cycling or hiking.

Closing out the list is Farmington, a small, wealthy city noted for its great, award-winning public school system and historic downtown area, which has recently seen extensive development. 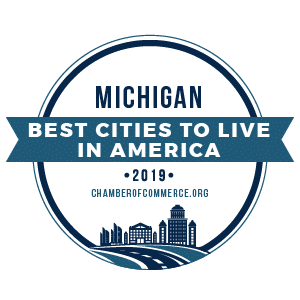