Best Cities to Live in California

Moving to California? Check out our guide to Starting a Business in California.

Considering its large area, varied landscape, and huge GDP which would make it the fifth largest in the world if it were its own country, California is practically a nation unto itself. The Golden State is the nation’s most populous, while many others dream of someday making a home in its borders.

With all of the great California communities, it’s hard to say which ones ought to top a list of the best cities to live in, but the following ones truly distinguish themselves as extremely comfortable communities.

Just west of San Jose in the Bay Area lies Santa Clara, California’s most liveable city. As part of the fabled Silicon Valley, Santa Clara is the home base for over a dozen top tech companies, including Synaptics and Intel. Additionally, Santa Clara University and a number of other universities are within the city’s borders. The combination of thriving industry and an atmosphere of higher learning leads to a high-earning, well-educated populace.

We head to SoCal and Orange County for #2 Aliso Viejo. The newest city in the county and the only one to be incorporated this century, Aliso Viejo boasts a median household income of over $92,000 and borders the beautiful Aliso and Wood Canyons Regional Park.

Santa Barbara is a large city along the Pacific coast that has it all: a bustling economy, resorts, national parkland, and a thriving education sector. UC Santa Barbara is the city’s largest employer, but the city is also home to a significant aerospace and defense sector.

We head to neighboring Lompoc for #4 on the list. The city of around 44,000 benefits from the excellent Mediterranean climate of the area and names Vandenberg Air Force Base as its most dominant economic force.

Closing out the top five is the idyllic lakeside community of South Lake Tahoe.

Best Cities to Live in California 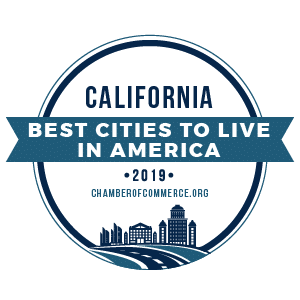