Best Cities to Live in Arkansas

Moving to Arkansas? Check out our guide to Starting a Business in Arkansas.

Despite its former reputation as a hillbilly backwater, Arkansas has plenty of fine communities where families, or single people, can settle down. Many thriving corporations are based in the state, including the world’s #1, Walmart, which provides numerous jobs to Arkansas communities. Furthermore, Arkansas boasts the 8th lowest cost of living among the states, according to CNBC. If you don’t believe us that Arkansas has a number of great cities to live in, a glance at the state’s top five should convince you.

Conway earns the distinction of being Arkansas’ top city to live in. The county seat of Faulkner County, Conway is a city of around 65,000 located in the middle of the state.  A fast-growing city, Conway is well known for its many employers, including computing company Hewlett Packard and Insight Enterprises, as well as for being the home of three higher learning institutions. It’s well-earned designation as an industry and education hub is seen in Conway’s well-educated and high earning populace.

Second place goes to Bentonville, a city of around 50,000 in the northwest corner of the state. The county seat of Benton County, Bentonville thrives due to its status as the headquarters of three Fortune 500 companies, Walmart, Tyson Foods, and J.B. Hunt, that provide many well-paying jobs to the city’s residents.

Nearby Bella Vista, also in Benton County, places #3 on our list. Bella Vista started out as a summer resort town when it was first established in 1917, and this amenable vibe still shines through. Residents of Bella Vista enjoy many parks, golf courses, and swimming pools, making it a very livable city, indeed.

The final two spots belong to Little Rock (#4), the capital and largest city in Arkansas, and Rogers (#5), the third city of wealthy Benton County on the list.

Best Cities to Live in Arkansas 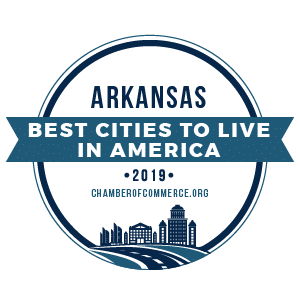