Best Cities to Live in Alaska

Moving to Alaska? Check out our guide to Starting a Business in Alaska.

Alaska is a state of extremes: it’s by far the largest state in the U.S. by area, but also 48th in population. In fact, of the state’s cities, only Anchorage’s population tops 40,000. However, that doesn’t mean that Alaska’s small cities are a bummer to live in, as long as you are inured to cold weather.

High median wages, a relaxed character, and closeness to nature all make Alaska’s choice communities pretty great places to settle down. Let’s take a closer look at the northernmost state’s top five cities to live in.

The city of Fairbanks, in the heart of the state, is our #1 Alaskan city to live in. Bolstered by a high median household income, the city of around 33,000 has a lot to offer despite being the coldest large city in the nation. Fairbanks’ attractions include the Museum of the North, with exhibits centered on Alaskan art and history, and Pioneer Park, a fun little theme park with a historical theme.

Anchorage, Alaska’s largest city, comes in second. Beautifully situated outside of the Chugach Mountains, Anchorage is considered one of the most tax-friendly cities in the United States.

The third best city in Alaska to settle in is Juneau, the state capital. With strong fishing and tourism industries, as well as a sizable government sector, there are plenty of jobs to be found.

Two small communities in the Matanuska-Susitna borough, Palmer (#4) and Wasilla (#5) close out Alaska’s top five. With populations below 10,000, neither is a large city, but both are very pleasant bedroom communities of Anchorage, where much of the workforces of Palmer and Wasilla commute.  Palmer, in particular, is notable for its large vegetable harvests as carrots, broccoli, and cabbage thrive in the cold climate.

Best Cities to Live in Alaska 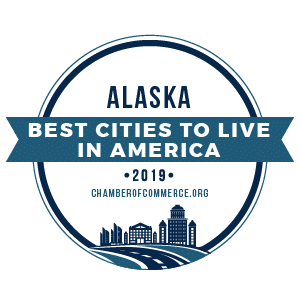