Moving to Alabama? Check out our guide to Starting a Business in Alabama.

Though Alabama doesn’t compare favorably to other states in things like median household income or education, there are cities in the Heart of Dixie that do prove to be comfortable places to live. Let’s zoom in on Alabama’s most livable cities.

With a median income over 40,000 higher than the state average, Madison is Alabama’s best city to live in. Located in Madison County near the northern border of the state, Madison thrives due to its software industry–its leading employer is the computer software company Intergraph, although many inhabitants commute to nearby Huntsville for work.

Placing second on the list is Fairhope, a small, yet fast-growing city of over 22,000 in Baldwin County along the shore of Mobile Bay. Fairhope maintains a pleasant, small-town vibe, and residents enjoy an annual “jubilee” where fish, blue crabs, and other sea creatures become exceedingly easy to catch near the shore.

Troy, another modestly-sized yet fast-growing city located in Pike County, is Alabama’s third best city to live in. Troy has a long history, originally being part of British West Florida before American Independence, and was officially incorporated in 1843. Its status as a college town, home to Troy University, explains its well-educated populace and high median household income.

A close neighbor of #2 Fairhope, Daphne places fourth on the list. The largest city located on Mobile Bay, the residents of Daphne enjoy many of the perks of other communities in the area, including the famous jubilee.

Rounding out Alabama’s top five most livable cities countdown is Anniston, the county seat of Calhoun County in the northeast part of the state. Nicknamed “The Model City”, Anniston goes a long way in earning that distinction, with cultural attractions such as the annual Knox Concert Series. 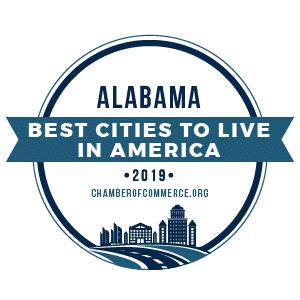